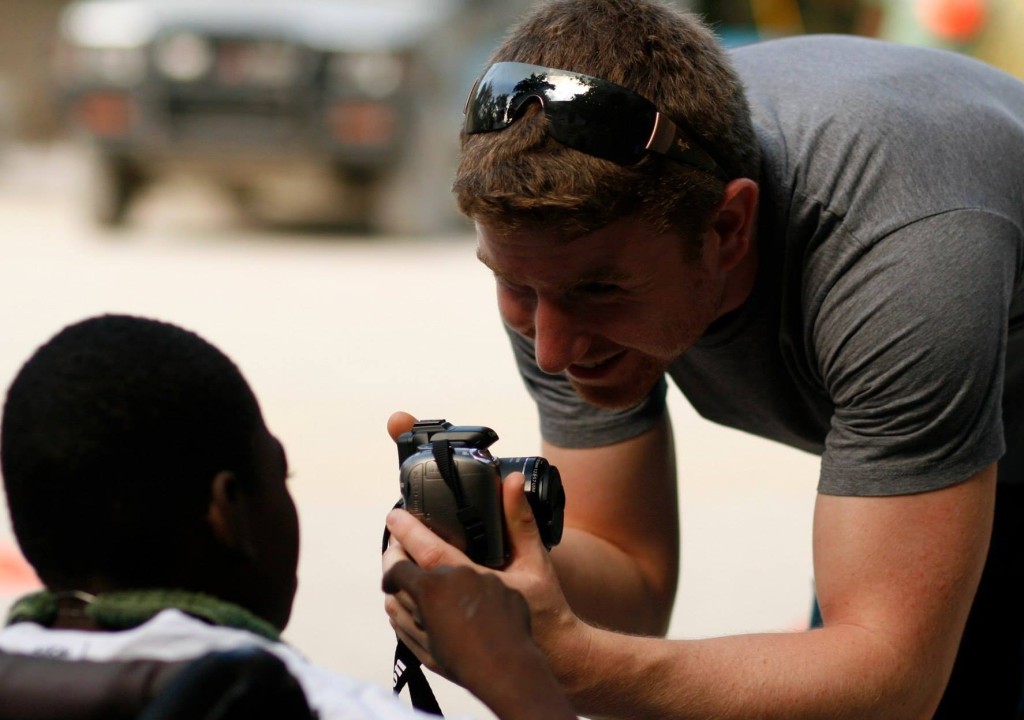 Port-au-Prince – The greater capital’s sprawl is a concrete jungle. Everything is made from cement and cinderblock, stretching out as a labyrinth in all directions. The smells of petrol and pollution are overpowering; dust covers everything and is kicked up by cars navigating the rocky streets.

But among the concrete, pollution and dust, the entire area is teeming with life – locals bustle to and fro against a backdrop of tropical overgrowth lining the streets and peeking out from walled compounds.

Haiti was my new frontier, and in one week it shattered the glass ceiling of my comfort zone. Equipped with virtually no French or Creole, I decided to jump off the cliff, and get on a plane from Miami bound for Toussant Int’l Airport. The flight is only an hour and a half, but Haiti is a world away.

I went to Haiti to consult for an organization called Enabling Minds, which tries to improve the lives of children with intellectual disabilities in Haiti by integrating them into schools, while promoting tolerance and understanding among society. They are one group of many who have answered the call to assist Haiti, and I was honored when I was invited to work with them as a strategic consultant.

Stepping off the plane, visitors to Port-au-Prince are immediately welcomed by calypso musicians and a newly renovated airport. In Haiti, one is almost always greeted with a smile and lively spirits. After clearing the airport’s thoroughfare, we were met outside with a “Heeeey man!” from our driver, who possessed a joie de vivre found all over the island. With that, we were on our way to our compound in Croix-des-Bouquets, a suburb 20 minutes from the capital’s airport and somewhere in the concrete jungle.

My adventure revolved around the school and clinic on a compound called San Carlos Borromeo, where Enabling Minds is implementing their flagship project that integrates students with intellectual disabilities into the school. The school and clinic also bring in volunteer doctors, dentists, physical therapists, psychologists, teachers and aides from around the world through partnerships with organizations like Fundación América Solidaria. The compound is run by a firecracker of a Colombian nun named Sister Gloria. Stout, vivacious, hardy and incredibly organized, Sister Gloria captains this great humanitarian ship in Croix-des-Bouquets with grace.

There is a culture among people who respond to humanitarian emergencies: you adapt and help where you are most needed, regardless of what the original plan had been. Being bilingual in a community where half spoke Spanish and half spoke English, I was designated translator in addition to my role with Enabling Minds. At one point I was even providing translation services for a Cuban doctor – the first Cuban (aside from Cuban-Americans) I had ever had the pleasure of meeting.

The environment also gets you to perform tasks you never thought you’d do. I’ve never been that great with kids, but on my first full day I found myself serving as caretaker of a 5-year-old with spina bifida. He needed to go to the clinic to be fitted for a wheelchair, and I accompanied him other volunteers to the clinic to do some translation. When he was finished, none of the other volunteers were anywhere to be found, likely dealing with a crisis somewhere. The child needed to get back to school, and so it was up to me. “Ecole?” I said, in all the French I could muster. He nodded and stretched his arms around me as I picked him up. So there I was, carrying a 5-year-old Haitian child with spina bifida through the dusty streets back to the school. The sun hurt his eyes, so I put sunglasses on him and we pressed on toward his kindergarten class.

Each day in Haiti began with my personal ritual of taking my morning coffee up to the roof of the compound, watching the sunrise set the mountains aglow, and listening to my “Haiti mix” on Spotify. @MindyKaling, every morning I thought of you and of that scene from The Mindy Project. The difference being I was alone and nobody proposed to me. #sigh #imgoingtodiealone #allmyfriendsareinarelationshiporengagedormarried.

From sunrise to sunset, the days were filled with magic. Aside from leading seminars, providing coaching, and vision mapping for Enabling Minds, I spent my days in beautiful ways I’ll never forget. I came away having grown as a person and realizing that these moments are what life is about. For example, I helped lead a lively dance class for children with intellectual disabilities. In the past I had not always been comfortable around people with intellectually disabilities – an ugly but honest statement. I suppose that I have never been a natural caregiver. This irrational fear was entirely overcome. The jovial dance, the children’s smiles, and their excitement were all catalysts. Dance breaks down barriers to common humanity.

When one of the Enabling Minds students spilled his lunch all over himself on a class picnic, and the other aides were putting out fires elsewhere, he looked to me. He could not get the spoon from his bowl to his mouth. There was no one else to help; it was up to me. I got him a second serving, sat down with him under a tree, and helped him eat. I made sure he could swallow his food and didn’t choke; I wiped his clothes and his mouth.

There were some moments of overpowering sadness – touring an orphanage for the intellectually and developmentally disabled in Croix-des-Bouquets was one of the most difficult and heartbreaking experiences I’ve ever had. There were dozens of children in a communal area strapped into cribs or wheelchairs, unable to speak, unable to eat. Their caretakers could do little more than feed, shelter and keep them clean given the orphanage’s meager resources. The emotive response was so strong that I had to remove myself and sit alone.

There were also moments of great joy – at one point, I found myself sitting in the back of a pickup truck, speeding down National Route 3 toward Port-au-Prince, blasting M83’s Midnight City, and watching the cacophony of people, marketplaces, tap-taps and concrete buildings pass by. I was sun-kissed, with a glowing smile on my face. I jetted by in the pickup as passersby – some of the world’s friendliest – waved to me or looked inquisitively at my presence. The feeling of happiness welled up inside me, and I recognized that it is at simple moments likes these when I am happiest.

One day, all the American volunteers and the Cuban doctor piled into a car to go on an excursion together. We talked, got to know one another, discovered we all had much in common and that the old, tired animosities between our countries simply don’t matter anymore. This was international relations at its best, just regular people being people.

Within the concrete jungle of the greater capital area are some treasures that should not be missed by those who come here. In the downtown area of Port-au-Prince, the National Museum of Haiti is highly recommended. The energetic guided tours in English, French, Creole or Spanish showcase Haitian heroes and Haitian history – well worth the admission cost.

In Croix-des-Bouquets you will encounter the finest metal art the greater capital area has to offer when you pay a visit to the metal drum artisans. The sound of hammers on steel beckons, as do the throngs of stores that specialize in this uniquely Haitian craft. You could hire a car to take you to their workshops, but I personally recommend hiring a moto (a dirt bike) to take you. There isn’t much like zipping through the backstreets of Haiti on the back of a moto with the wind in your hair; it feels like freedom.

Metal art pieces range from scenes of Haitian life to animals, dance, music, Catholicism, and vodou. I found pieces that depicted sea spirits, and one of the vévé (religious symbol used in Haitian vodou) invoking Baron Samedi for myself. Everything I knew by that point about Haitian vodou stemmed from an excellent book called Haitian Vodou: An Introduction to Haiti’s Indigenous Spiritual Tradition by Mambo Chita Tann. It equipped me with enough elements to discuss the artist’s work. He was glad that I knew something about the spiritual path and could recognize some of the lwa (vodou spirits). The metal artist finished the conversation with, “I have to see you again. But for now, I will send my spirit with you.” With a firm handshake and sincerity written on his face, I knew he was serious. He then gifted me a piece with the vévé of the lwa Erzulie and sent me on my way.

Haiti was very good to me. Besides the artisan, other Haitians I had the pleasure of meeting were all incredibly dear, genuine people. I’ll not forget the woman who made empanadas for us in her restaurant/hut by the school almost daily, or the loving staff who are there for children who would otherwise be neglected. Most importantly, the country allowed me to break out of my comfort zone and grow as a human being. I am excited to return, but in the meantime I carry the memories, lessons and spirits from the island wherever I go.

A song by Jets to Brazil called Chinatown says, “Believe everything and you’ll be right half the time.” The day before we left, I implored the lwa of the island to help a dear friend of mine back in the U.S. whose heritage stems from this island. He wants to get into a graduate program. He has his own personal hash tag for me: #healtheworld. I’m no practitioner of Haitian vodou, but I did what felt to be natural. I made the lwa an offering of seashells and coral, which now rests in the sea. I don’t think I’ll ever stop being a believer.